A festive feast is not complete without a festive dessert; be it a trifle, fruit cake or biscuits. Why not be kind your waistline this festive season? Try our nutritious spiced apple crumble that has a crispy oats topping with a tender juicy apple filling. This scrumptious dessert is tied together with a refreshing and tasty coconut ice cream. Prepare to impress your guests and family with this spice-filled dessert that will definitely be enjoyed by young and old. 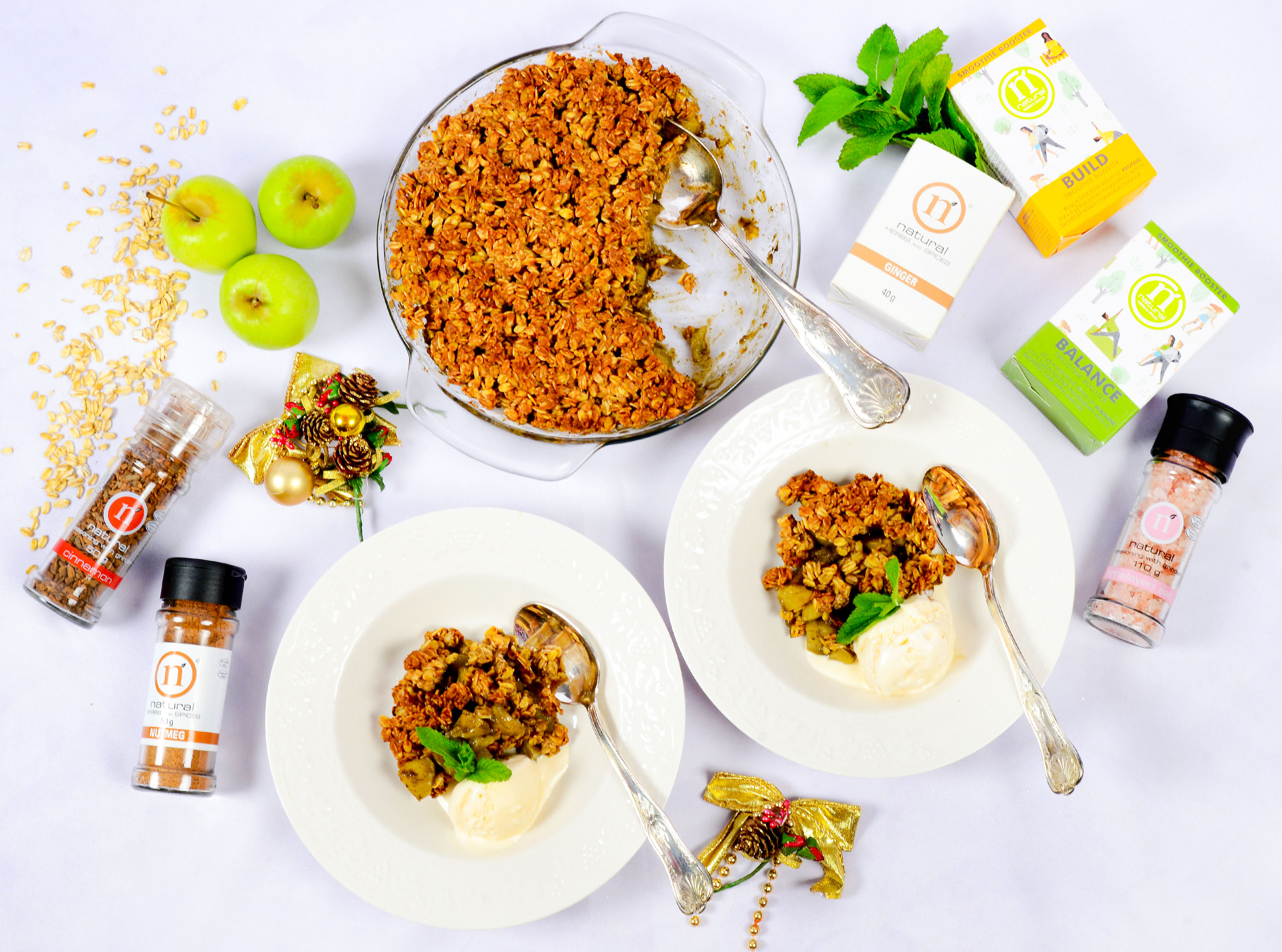 What you will need

This is one of the easiest ice cream recipes you will ever make. Simply whisk together coconut milk, honey, vanilla and Natural Herbs and Spices Pink Himalayan Salt. Pour your mixture into ice cube trays and freeze overnight. The next day or whenever you are ready to make the ice cream, blend the frozen ice cream mixture together with your milk of choice in a blender or food processor. You can either eat it straight away or freeze for a few more hours for a firmer texture.

To make the spice apple crumble (FYI: it pairs really well with the coconut ice cream), start off by preheating the oven to 175°C.

Now it’s time to prepare the filling for the crumble. In a large mixing bowl, toss apples in corn flour, Natural Herbs and Spices Cinnamon, Nutmeg, Ginger and Balance Smoothie Booster. Mix it until each apple is coated in the spices.

Time to assemble the crumble. Tip out the apple filling mixture into a 1L glass baking dish and gently press down the apple with your hands or a spoon. Sprinkle over the topping mixture and bake your apple crumble for 40- 45 minutes until the apples are tender and the topping is golden brown. We suggest allowing the apple crumble to cool completely before serving to allow the juice to fully thicken.

Once your apple crumble has completely cooled serve with a scoop or two of your coconut ice cream and enjoy!

Recipe by food stylist and blogger of everything wholesome & tasty, Yena Mgobhozi: https://www.yourkitchen-newgym.com

Satisfy your sweet tooth with these nutty chocolate bars that are not only healt...

Who doesn’t love banana bread? It’s one of those classic crowd pleas...